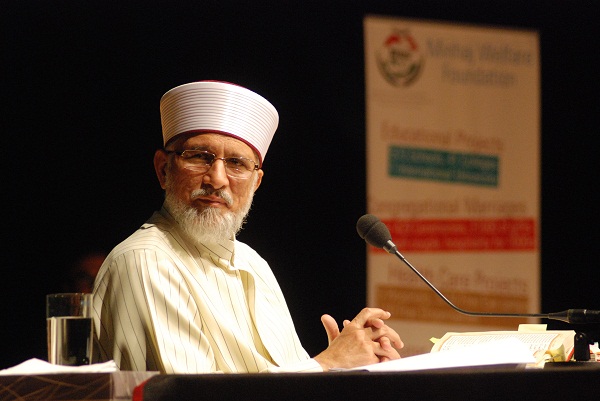 Shaykh-ul-Islam Dr Muhammad Tahir-ul-Qadri has asked the government of Pakistan to file a case in the International Court of Justice, adding that he was ready to plead the case on behalf the people of Pakistan and the Muslim world. He said that he regarded the profane movie as heinous attempt to injure the feelings of the billions of Muslims and formidable threat to global peace and wrote a detailed letter to the US President Barack Obama, UN Secretary General Ban Ki-moon, OIC Secretary General, heads of various countries and the world institutions of human rights.

Dr Muhammad Tahir-ul-Qadri said that being a servant of the Muslim world and the one who had dedicated his life to promotion of peace, harmony and interfaith dialogue, he thought it to be his duty to apprise the leaders of the world community of dangerous implications of such inhuman and soul rending incidents to put an end to such practices once and for all. He said that the repeat of such incidents constituted a potent danger to the global peace.

Shaykh-ul-Islam Dr Muhammad Tahir-ul-Qadri said that in his letter, he made it clear to the heads of the states and international organizations that the sacrilegious movie not only deeply hurt the sentiments of 1.5 billion Muslims but also created the feelings of disgust among the people of the civilized world who belong to diverse cultures, civilizations, faiths and religions. He wrote in his letter that no segment of any society or religion allowed anyone to utter even a single blasphemous word aimed at contempt of their religion, Book or holy personages who form the linchpin and nucleus of their faiths. Therefore, it was a global matter, not restricted to the Muslims alone. No religion either allowed or approved of the committal of such blasphemies.

Citing references from Old and New Testaments, Dr Muhammad Tahir-ul-Qadri said that before the Holy Quran, other Divine Books contained the condemnation of blasphemy of holy personages. He said that in order to effectively fight a war on terrorism and extremism, there was a need to forge unity, which was possible by building bridges between various faiths and civilizations and bringing them on one page. He said that concerted efforts needed to be made on this count but unfortunately, conspiracy was afoot to play havoc with the global peace in the name of freedom of expression, which constitutes a danger for the entire humanity

Dr Tahir-ul-Qadri also included the excerpts of letters of renowned figures such as former UN Secretary General Kofi Anan, former UK Secretary of State, and a French Minister in which they talked of limits of freedom of expression. He also mentioned a cartoon published in The Independent newspaper in January 2003 in which the then Israeli Prime Minister was shown as eating the head of an Israeli kid. The cartoon was captioned as ‘did you not ever see a politician kissing a kid?’ He said that this led to massive outpouring of protest from the Israeli people, which was just a natural reaction.

Shaykh-ul-Islam Dr Muhammad Tahir-ul-Qadri also cited the Holocaust clause in the laws of Western countries as well as clause 3 of Article 1 of the UN Charter, which protects dignity and respect of man. He said that the letter also mentioned the references from the laws of Australia, Finland, Germany, Holland, Canada, New Zealand, Denmark, Brazil, Chili, France, India, Iceland, Ireland, Poland, Singapore, South Africa, Switzerland, Sweden and International Covenant on Civil and Political Rights and proved that human dignity was duly protected, which could not be violated in the name of freedom of expression.

Concluding his letter, Dr Muhammad Tahir-ul-Qadri wrote that a handful of radicals and mischief mongering elements could not be allowed to play havoc with the global peace irrespective of the fact whether they belonged to Mosque or a Church. He said that if we did not stop such heinous acts together, the future of our coming generations would be threatened.

He wrote in his letter that he was hopeful that the leaders of the world community were mindful of these menaces and would take steps against such threats to put a permanent end to such practices.

Shaykh-ul-Islam Dr Muhammad Tahir-ul-Qadri addressed a press conference on September 29, 2012 at Islamabad Press Club in which he threw light on the steps taken by MQI regarding the blasphemous movie. The highlights of the movie are: