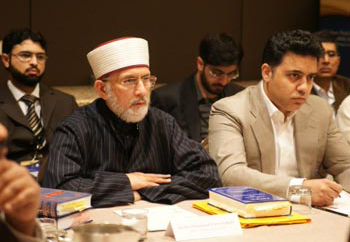 Shaykh-ul-Islam Dr Muhammad Tahir-ul-Qadri is a man of manifold and staggering achievements. Shaykh-ul-Islam Dr Muhammad Tahir-ul-Qadri is the founding leader of Minhaj-ul-Quran International (MQI), an organisation with branches and centres in more than 80 countries worldwide, working for the promotion of peace and harmony between communities and the revival of spiritual endeavour based on the true teachings of Islam.

Shaykh-ul-Islam was born on February 19, 1951 in the historical city of Jhang, Pakistan. The son of a great spiritualist and intellectual of his time Al-Shaykh Dr Farid-ud-Din al-Qadri, Shaykh ul Islam was educated from a young age in both the Islamic and secular sciences simultaneously, imbued with the belief that his entire life would be devoted to the renaissance of Islam. Although he had already started his religious education under his father two years earlier, his formal classical education was initiated in Madina al-Munawwara at the age of twelve under the tutelage of the Great Medinan Scholar, Al-Shaykh Zia al-Dīn al-Madani (RA), who lived for over a hundred years.
Another of the most notable and eminent teachers of Shaykh ul Islam belonging to the Hijāz with whom he spent his early years learning knowledge of the science of Hadith, was the Great Meccan Hadith Scholar, Muhadith al-A’zam fil Hijāz, Al-Shaykh A’lawi bin Abbas al-Māliki al-Makki (RA), the father of the renowned Hijāzi Hadith Scholar, Al-Shaykh al-Muhaddith al-Sayyid Muhammad bin A’lawi al-Māliki al-Makki (RA). Having spent over ten years under the tutelage of his father and other eminent scholars of his time, Shaykh ul Islam has amassed an unparallel understanding of the Shariah Sciences as well as the Arabic language. He had completed his studies of the Classical Islamic Sciences by the time he received a First Class Honors Degree from Punjab University in 1970.

Shaykh-ul-Islam is a prolific author and researcher. He has authored around 1000 books of which 400 are published works in Urdu, Arabic and English. He has given authority to transmit Hadith to some of the world’s greatest scholars and has lectured extensively throughout the world to audiences of millions. While thoroughly grounded in the classical tradition of Islam, his learned instruction and creative interpretation of the religion provide refreshing perspectives on the role of Islam in the contemporary world.

There is no doubt that Shaykh-ul-Islam is a man of extraordinary capabilities. He is a theologian and a theosophist, a scientist and a spiritualist, a revivalist and a reformer, a philosopher and a political thinker. He is arguably the foremost jurist and expert on Islamic legal affairs in the Muslim world, the world’s most accomplished Islamic scholar and a globally acknowledged authority. He has been bestowed the honoured title of “Shaykh-ul-Islam” by the most eminent scholars around the world in recognition of his incredible service to Islam as well as his scholarly and academic supremacy.

Shaykh Hassan Mohi-ud-Din Qadri was born in Lahore and is the eldest son of Shaykh-ul-Islam Dr Muhammad Tahir-ul-Qadri. His eminent father has trained him meticulously from a young age, imparting to him both Islamic education and secular sciences simultaneously with a vision for the leadership of the next generation. With consciousness about Minhaj-ul-Quran International, the NGO organized by Shaykh-ul-Islam that is globally active in pursuit of love, peace, knowledge and prosperity, Shaykh Hassan set out to acquire learning commensurate with the requirements of the seat he was going to run.

Shaykh Hassan received his early education from different institutions in Lahore. For spiritual fortification, he pledged allegiance at the hands of Sayyiduna Tahir Ala al-Din al-Qadri al-Gilani in his childhood. In addition to attaining spiritual education from his venerable father, he also acquired formal education in classical and modern disciplines and received his graduation degree in law from the University of Punjab and completed the seven-year Shahada al-Ilmiyya degree in Islamic sciences from The Minhaj University, Lahore. He went on to accomplish a Masters degree in Management Sciences at the London University in the United Kingdom.

Shaykh Hassan has been assimilating further knowledge from contemporary eminent scholars especially of the Arab world, in addition to the matchless supervision, coaching, teaching and education administered to him by his learned father, the matchless scholarly sage of international repute, Shaykh-ul-Islam Dr Muhammad Tahir-ul-Qadri. These renowned teachers of great fame include personalities of the Arab and non-Arab world like Imam Yusuf ibn Ismail al-Nabhani through the single person of the chain in the form of Shaykh Husayn ibn Usayran al-Lubnani. He has also remained under the tutelage of most eminent authorities and Shuyukh of Syria in Qur’anic exegesis, Hadith, jurisprudence and other Islamic disciplines. They include such distinguished and illustrious personalities as Shaykh Adib al-Kallas (a contemporary of Farid al-Milla Dr Farid al-Din Qadri), Shaykh Lashkari al-Lahfi (a spiritual personage of great stature and an authority on the Islamic doctrine), and Dr Said Ramadan al-Buti. He completed the recitation of Sahih al-Bukhari in only nine days from Shaykh Fatih al-Kittani ibn Muhammad ibn Makki al-Kittani in addition to reading “Sharh al-Mawahib al-Ladunniyya”. Furthermore, he also benefitted from the renowned scholarly and spiritual personalities of Sudan, Yemen and Egypt. Currently, he is pursuing his PhD at the Jamia al-Dawl al-Arbia University (Egypt) on comparative study between the American, British and European Constitutions and The Pact of Madina. He has also pursued learning in leadership, financial management and organizational management from different international universities.

Many of Shaykh Hassans books in Urdu, Arabic and English languages are in various stages of publication. He has authored a book in Arabic establishing with empirical research that since the creation of man to date, all languages have been derived from the Arabic language and that it is the mother of all languages. He has undertaken a research work on exegesis based on a comparative study of various chapters of the Holy Quran deriving from them the straight path of life. That work has earned great appreciation from the renowned Shuyukh of Syria. His books in English on the subject of “Management Sciences (In the light of the Holy Quran and Sunna) and “Altruism” too are in the process of printing. Likewise, one of his books in Urdu language is titled “The One Hundred Shaykh-ul-Islams” is also in the last phase of completion. Moreover, a large number of his columns, research papers and articles have been published in Urdu, English and Arabic newspapers and research journals and have won applause from intellectual circles for the quality of content and research.

Side by side with his intellectual and scholarly contributions, he also takes keen involvement in dynamic organizational and practical activities of Minhaj-ul-Quran International (MQI). He is the president of MQI’s Supreme Council as well as a member of the Board of Governors of The Minhaj University in Lahore. He is a regular speaker in conferences, seminars and workshops on different religious, social and political subjects held from time to time in Europe (particularly the UK), Canada, the Middle East and other parts of the world. He has undertaken exegesis of selected verses of the Holy Qur’an which has been telecasted on different TV channels in the form of lectures.

Shaykh As’ad Muhammad Saeed as-Sagharji  is acknowledged as one of the leading contemporary Hanafi jurists of the Arab world and spent many of his formative years as a scholar, teaching classical Islamic sciences in the mosque of the Prophet (peace & blessings be upon him),in the blessed city of Madinah al-Munawara.  The Shaykh is a prolific author and has produced a number of notable works, including the classic work, al-Fiqh al-hanafī wa adillatuhū, a comprehensive manual on Hanafi fiqh, which along with the Shaykh’s other famous works such as Shu’ab al-īmān, Sayyidunā Muhammad Rasūlallāh (sallallāhu alay’hi wa ālihī wa salam), Zawjatun-Nabī (sallallāhu alay’hi wa ālihī wa salam) and Hajj wal-‘Umra are readily taught as study texts in many famous Arab universities, including the renowned Al-Azhar University in Cairo.  One of the Shaykh’s most prominent teacher’s was the distinguished Syrian scholar, Al-Shaykh al-Sayyid Ibrahīm al-Ya’qūbī (RA), descendent from the family of the Prophet (peace & blessings be upon him). The Shaykh has a number of chains of transmission (Ijazāt) linking him directly back to the founder of the Hanafī Madhab,Imām al-A’zam Abu Hanifa Nu’mān ibn Thābit (RA). As well as being an exalted jurist the Shaykh is also a spiritual guide and an adherent of the famous Shāzalīyya Arab Sufi order.  He is presently the Grand īmām, khatīb al-A’zam, of the famous Jāmi’a Masjid al-Umawī (the Umayyad Mosque) in Damascus, Syria, presiding over the 9 permanent īmām’s.

Originally from the Sudan, Shaykh Babikir arrived in Britain in September 1977. Shaykh Babikir Ahmed Babikir (sometimes known as Shaykh Ahmed Abubakr) has been actively involved in Dawah in the UK. He has been involved in promoting the true message of Islam all around the world. In countries such as South Africa, USA, Nigeria, Indonesia, Qatar, Dubai, Morocco, Holland and many others. He has also worked at spreading this message within the British Isles in schools, colleges, universities, banks, religious institutions and many other organisations. Shaykh Babikir participates in promoting Britain and British Islam through the Commonwealth and Foreign Office. He is currently the Imam of Yusuf Islam’s Islamia School founded in 1983. In 2004 the Shaykh founded his own charity Ulfa Aid providing homes for homeless people around the world. The Shaykh also delivers courses in different Islamic subjects in universities and Islamic Centre’s. One of the areas that the Shaykh is passionate about and has been hard to promote is interfaith dialogues which he believes are essential in a multi faith Britain. Shaykh Muhammad began his study under his father, Sayyed Yahya, rahmatullahi alaih, memorising the Glorious Qur’an and acquiring knowledge in many of the Islamic disciplines, including Aqeedah, Fiqh, Hadith and Ihsaan, with ijaazas (license to teach). He particularly specialises in the fields of Hadeeth and Tawheed.

He attended Al-Azhar Sharif University, Faculty of Usool-uddeen, where he studied under many scholars. In addition, he was under the tutelage of many stars of this century who resided in Syria, Madina, Makkah, Tangiers, Fez, Rabat, Egypt, Sudan and Jordan. He sat at the feet of, and was authorized by, many scholars such as Al-Imam Al-Hafeth As-Sayyed Abdullah bin Assidiqq Ghumari, Hafeth Abul Aziz bin Assiddiqq Ghumari, Hafeth Ibrahim bin Assiddiqq Ghumari, and Hafeth Hasan bin Assiddiqq Ghumari, radiaAllah anhum, Shaykh Hasan Qaribullah of Sudan, Shaykh Abdullah Al-Husayni, Shaykh Muhammad Al-Bata’ihi, Shaykh Jamil Ar-Rifaiy, Sayyed Al-Habib Al-Attas of Hadramout and others. Among the Mashayekh he learnt from are Shaykh Abdullah Siraj-Addin Al-Husayny, the Ba’Alawi scholars, Shaykh Abdullah At-Talidi, Shaykh Qaribullah of Sudan, the late Muhaddith Al-Haramayn Sayyed Muhammad Alawi Al-Maliki and many other honorable scholars in Morocco, and Hijaz.

Some of the books Shaykh Muhammad studied under his Shuyukh partially or wholly, and received Ijaza’s of Teaching in them with continued chain of narration, are as follows: Al-Qur’an Al-karim, Tafeer Al-Imam Al-Fakher Arrazy, Tafseer Al-Imam Al-Qurtubi, Tafseer Al-Imam At-Tabari, An-Nahrul Al Madd by Imam Abu Hayyan.

As a prominent scholar of mainstream Islam, Shaykh Muhammad Hisham Kabbani, has spent his life spreading the teachings of peace, tolerance, respect and love that are the messages of Islam throughout the world. In the United States for the last eleven years, Shaykh Kabbani has continued to disseminate the light and peace of Islam’s spiritual dimension to people of every background, ethnicity, race, and belief.

He has qualifications in Chemistry from the American University of Beirut, Lebanon; Medical studies in Louvain, Belgium; Degree in Islamic Divine Law from Damascus, Syria; License to teach, guide and counsel students in Islamic spirituality from the renowned Shaykh Muhammad Nazim Adil, authority of the Hanafi school of Islamic law in the Middle East and world leader of the Naqshbandi Haqqani Sufi Order.

He has authored a number of books on Islam.